Kishore Biyani’s Future Retail (FRL) has sought two weeks from the Supreme Court (SC) to hammer out a solution with lenders on the issue of clearing dues and avoid being tagged a non-performing asset (NPA).


The council to the lenders of Future Group suggested an open bid between Amazon and Reliance Industries (RIL) to settle the dispute and ensure recovery for banks. It also argued that the lenders’ contract with Future Group is the only one involving depositors’ money and has public interest, given that its exposure is Rs 17,000 crore. It said if the loan repayment is pushed by a year, the outstanding could balloon to Rs 25,000 crore.

This comes on the back of FRL approaching the SC to direct its lenders to extend the timeline under the framework agreement for monetisation and extend the cure/review period (of 30 days) under the agreement, to avoid the NPA label.


The council to lenders also said that the entire assets of FRL, which are entitled to be sold, may be subject to an open bid. The banks’ council argued in court that both Amazon and RIL are flush with funds and should agree to an open bid.


FRL had missed the first deadline to repay Rs 3,494 crore. A 30-day grace period for clearing the dues expired on January 29, which prompted the independent directors of the company to write to Amazon, seeking a bailout.


In its previous hearing on Tuesday, the SC said no party should benefit from consequential punitive action against FRL in loan repayment. 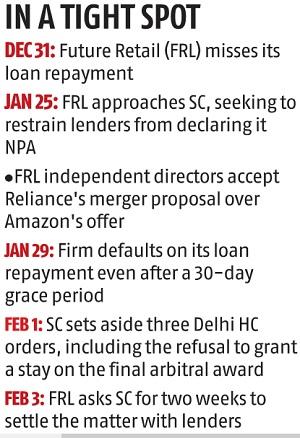 FRL’s council had argued in court that it needed some time, and should its merger deal with Reliance Group come through, it could service all debt.


On Tuesday, the SC also delivered a verdict setting aside three Delhi High Court orders, including refusal to grant stay on the final arbitral award restraining FRL from going ahead with its merger with Reliance Group and ordering fresh adjudication.


A senior executive of a public sector bank told Business Standard that FRL is now an NPA . That being a restructured loan, lenders have been making regulatory and additional provisions since the first quarter of 2021-22.


On January 25, FRL’s independent directors had accepted the transaction with Mukesh Ambani-led Reliance Group and had then rejected the proposal of US e-commerce major Amazon’s investment in FRL.


“It helps FRL to meet almost all its liabilities and in the process helps protect the investment of small shareholders and jobs of over 25,000 employees,” said a letter by FRL’s independent directors.


The letter said it would not serve any purpose in engaging in further discussion on the proposal Amazon had made in the letter.


“If you were serious about providing funding to the extent of Rs 3,500 crore within the timeline (in order to repay banks and avoid NPA classification), we would have been happy to engage with you,” read the letter.


The letter further stated, “but it is now clear that your letters were just a game of smoke and mirrors to serve your purpose of gaining all the media attention and create media headlines that Amazon is prepared to help”.


The independent directors had also asked Amazon to confirm whether it was willing to fund Rs 3,500 crore by January 24 as it had its loan payment due on January 29.


On February 2, Standard & Poor’s affirmed the ‘CCC-‘ long-term issue rating on FRL’s US dollar-denominated senior secured notes. It expected the company to service the semi-annual coupon during the 30-day grace period, in line with past trends. The coupon was due on the notes on January 24.