The first of three data centers at the Dielsdorf site is live.

Lupfig, January 17, 2023 – Green is building its major Zurich Metro Campus project on an area of more than 46,000 m2 in Dielsdorf, near Zurich. It consists of three high-performance data centers (M, N and O) for cloud providers and companies, as well as a business park with several office buildings. The first data center was occupied by major customers in December 2022 and officially goes into operation today. The next stages have already been planned. 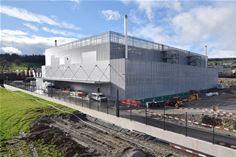 The architecture, choice of materials, room design, systems and cooling concept were all optimized. The latter ensures that, whenever possible, ambient air is used for cooling rather than mechanical and energy-intensive solutions. Photovoltaic installations on the roof of the building and the use of renewable energy complete the sustainability concept. Green achieves top scores, with a PUE value close to 1. The use of waste heat is also considered exemplary. The planned district heating system will allow more than 3,500 households as well as commerce and industry in the region to benefit from climate-neutral heating and process heat from data center M.

The next stages of the expansion have been determined: civil engineering work on the south office building started in January 2023. A portion of the approximately 3,000 m2 office space will be used by Green to ensure the smooth operation of the high-performance data centers on site and to maintain close contact with customers. Additional office space will be leased.

Green has accelerated its growth and innovation program in Switzerland. The next step is the construction of data centers N and O. Due to demand, construction will begin as early as 2023. “We are constantly investing in innovation and are growing in a customer-oriented and sustainable way,” says Roger Süess, CEO of Green.

About Green
Green offers internet, hosting and domain services for private individuals and is the leading provider of data center services in Switzerland. The company operates six data centers at four locations in the greater Zurich area. Green is planning additional data centers in both Dielsdorf and Lupfig and is thus accelerating its growth and innovation program in Switzerland. Green enables georedundant high-performance computing for cloud providers (hyperscalers) as well as companies and offers comprehensive networking solutions across all locations.