The government will sell 5 per cent of its stake in Life Insurance Corporation (LIC), through an initial public offering (IPO), of which 100 per cent is offer for sale. LIC filed its draft red herring prospectus (DRHP) with the market regulator Securities and Exchange Board of India (Sebi) on Sunday, thus setting the wheels in motion for the country’s largest-ever IPO.


The market regulator, according to sources, is expected to give its nod for the LIC IPO in three weeks. The Union government has often reiterated that the public issue of LIC will happen within the current financial year (FY22).

According to them, this maiden share sale should fetch the government between Rs 60,000 crore and Rs 75,000 crore, which could peg the insurer’s market value between Rs 12 trillion and Rs 15 trillion. The final valuation will be decided closer to the IPO.


But the DRHP has not revealed the issue size of the IPO. Actuarial firm Milliman Advisors LLP has estimated LIC’s embedded value at Rs 5.39 trillion as of September 30, 2021. The embedded value is a measure used to estimate the consolidated value of shareholders’ interest in an insurer.


“The IPO is 100 per cent OFS (offer for sale) by the Government of India and no fresh issue of shares by LIC. For filing valuation about 316 million shares are on offer, representing 5 per cent equity. LIC has a 66 per cent market share in new business premia with 283 million policies and 1.35 million agents as of March 31, 2021. The embedded value of LIC as of September 30, 2021, is Rs 5,39,686 crore (about Rs 5.4 trillion)” Department of Investment and Public Asset Management (DIPAM) Secretary Tuhin Kanta Pandey said in a Twitter post. 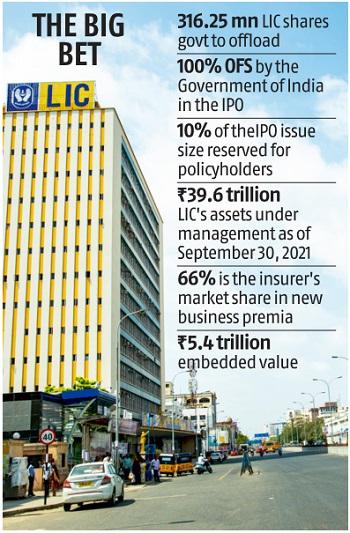 
The mega offering is coming at a time when foreign portfolio investors (FPIs) have hit an exit button. They have pulled out over $6 billion from domestic stocks, so far, this year. The IPO will test the appetite and depth of the domestic market. Paytm’s entry into the secondary market bombed with shares crashing more than 50 per cent.


The insurer has earned a net premium of Rs 1.87 trillion in the first six months of FY22. It has earned interest, dividends, and rent to the tune of Rs 1.24 trillion in the same period. Also, it mopped up Rs 23,246 crore from sale or redemption of investments.


While LIC continues to be the largest player in the life insurance market, it is losing market share to private players because the latter have a diversified product mix and strong distribution through bancassurance partners. As of January 2022, LIC’s market share in new business premia (NBP) stood at 61.16 per cent (according to the Irdai data) compared to 66.18 per cent in April 2021, thereby losing almost 500 basis points of market share to private life insurers, since the beginning of the financial year.


As of September 30, 2021, LIC operates through eight zonal offices, 113 divisional offices, and more than 4,700 branch/satellite and mini offices. LIC has traditionally been an agency-driven institution, with 1.33 million individual agents as of January 2022 — more than 55 per cent of the total individual agents the life insurance industry has. But lately, it has been wanting to diversify its distribution channels.


As of September 2021, LIC’s assets under management were Rs 39.6 trillion. LIC’s AUM are more than 3.3 times higher than the total AUM of all private life insurers in India; they are approximately 16.2 times more than the AUM of the second-largest player in the Indian life insurance industry SBI Life (AUM of approximately Rs 2.4 trillion). The figure is also 1.1 times the AUM of the entire mutual fund industry in India — Rs 36.7 trillion as of September 30, 2021.